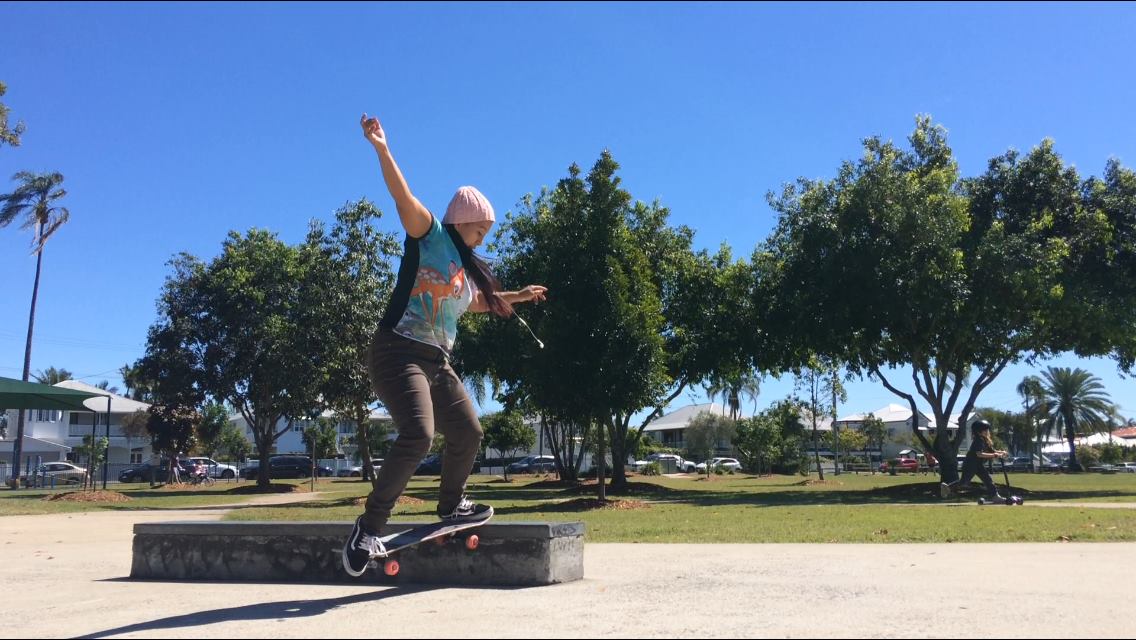 Dr Indigo Willing is a sociologist, skateboarder and has an established profile in research and community work. Photo: Mid nose slappy onto ledge.

Indigo has an established profile in transnational adoption studies and also writes about broader issues of migration, adoption, multi-racial families and transnationalism. She also publishes on the topics of the sociology of youth and subcultures, gender and violence, multi-generational participation in lifestyle sports, skateboarding studies and film research. As a lecturer, she teaches in the areas of sociology, criminology, creative industries and qualitative research methods.

Breaking boundaries and stereotypes, Indigo is also a dedicated skateboarder, and is a co-founder of the Girls Skate Brisbane skateboarding network (now We Skate QLD) and Consent is Rad, an international campaign promoting cultures of consent. She has also co-chaired several film festivals and video-making workshops for multicultural youth projects and is the co-founder of the Asian Australian Film, Forum and Network.

With a strong focus on community volunteering and engagement, she was also awarded a Medal in the Order of Australia (OAM) in 2006 for creating the Adopted Vietnamese International (AVI) network for adoptees from the worldwide Vietnamese community and war refugee generation. She returned her OAM in 2021 as a stance of support for LGBTIQ+ community and First Nations Peoples.

NOTE: Some of my intended research has been postponed or adapted following March 2020 due to the COVID-19 pandemic placing people into lock down, general social distancing and various other restrictions and adaptions required during this global pandemic. This includes visiting musicals such as the Rolling Thunder show, a The Sapphires tribute and Good Morning Vietnam show in 2021. The health of the ageing population involved with the Vietnam War and especially veterans is also a priority. Fieldwork is currently moved to 2022.

Tutor and Instructor: The Sociology of Youth (Second year course) at the School of Languages, Humanities and Social Science (LHS). Griffith University.  On campus in T2 and online in T1 and T3. Since 2018 – Current.

Prior roles include various lecturing positions (First year to Post-Graduate courses) in Sociology and tutoring in The Sociology of Sport at The University of Queensland during my PhD and Post-Doctoral Fellowship years.

For links to publications, talks and more in each area visit the options in the menu.

*Dr Willing announced she will return her OAM in 2021 as a stance of support for LGBTIQ+ community regarding protests against Margaret Court AC receiving the nation’s highest honour, and in relation to the date of the awards conflicting with Invasion Day on 26 January, an Indigenous day of mourning. She joins others taking this stance. Read her letter and other statements of protest by scholars and relevant individuals from the community here.